Before you read this article, please note… I am a guest poster on identityTheftSecrets. The views and opinions I am about to express may or may not reflect those of the owners of this site. I am not a financial advisor or an attorney.

All decisions you make are yours and yours alone. I am going to state what I see now, and what I see coming in the next couple of years. While I have done extensive research on both gold buying and identity theft, your investment and gold buying (or non-investment and/or non-gold buying) decisions are yours and yours alone. Having read this article does not constitute professional advice in any way. Buy whatever you think is best (gold, silver, copper, neodymium, europium, oil, stock, cows, whatever… based on what you decide is right. Just whatever you do, have an educated opinion based on real information).

The goal of this site, as I understand it, has always been to help people secure their personal wealth and personal well-being.

As a regular reader of IdentityTheftSecrets, I’m writing this article to help you protect your personal wealth, not necessarily from identity thieves, but from thieves nonetheless.

The US is experiencing massive deflation. The actual effects of this deflation are being disguised by the electronic printing of money (quantitative easing).

And any time lots of money is printed (even if it’s just in electronic format), the value of a currency inflates.

The credit contraction should have made the US economy deflate drastically. Prices should have dropped, products should have been more difficult to get a hold of, and supply chains should have needed to go through big changes.

Some of that happened, but not in as drastic or dramatic of a fashion as it should have if it had been allowed to run its course.

Money was literally created to stop that from happening.

Quantitative Easing is money printing. That’s the truth. It’s adding something that wasn’t there before, and is based on opinion rather than something physical.

Money out of thin air. Poof!

And here’s something you may not realize:

Whatever country you live in, you’re an investor in that country’s currency.

But you don’t have to be an actual investor to be investing in US dollars.

I’ve been told that more than 80% of the traffic on this site comes from the USA.

By default, you’re a US dollar investor if you’re a United States citizen.

Because you’re reading this, you’ve likely been “buying” and “selling” US dollars your whole life, while not knowing that’s what you were doing.

Then you’re trading your time and your effort, as an investment, into US dollars.

Since you’re an “investor” (whether you like it or not, that’s how it is), you should look at how your investment is doing.

I’ll be doing a comparison of US dollar growth against multiple world currencies in another post, but let’s take China for this post.

Look at this chart of the US dollar vs. The Chinese Yuan over the past 8 years. 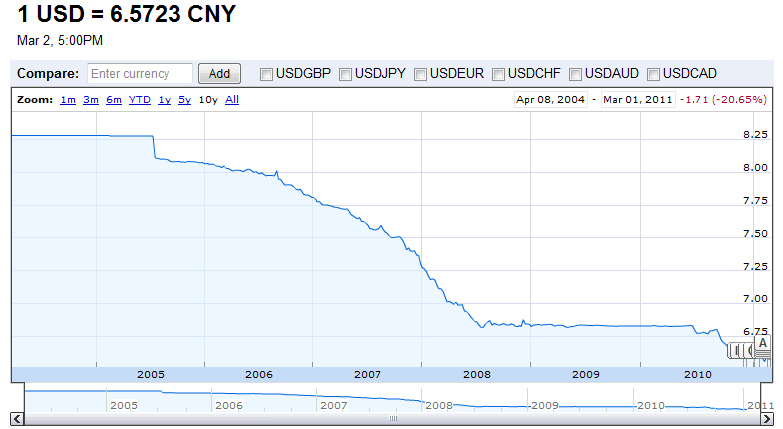 Why has stuff been so cheap for westerners to buy in China over the past few years?

Other than actual cheap labor, one reason things are so cheap for westerners in China is because the Chinese government has kept things cheap in China, on purpose, while focusing on turning their country into a mega-producer of everything.

Scroll up and look at the graph again… Actually, I’ll just re-post it here.

See the times when the graph nearly goes into freefall?

Those are the times when China has unpegged their currency (*and let it show it’s real value*) against the US dollar.

When the Chinese (and Americans) aren’t tinkering with it, the US dollar’s true value against the Chinese Yuan becomes apparent in a quick, massive, and drastic way.

As an investor in the US dollar, looking at this one graph alone should tell you that you might want to also buy some other assets.

(Wait until my next post when I show you what the other currencies look like. It’s not pretty.)

But how to buy other assets?

Well, you could run to the bank and change all your money into Yuan (pretend that you really need it because you’re going on a trip to China), but then take all your Chinese money home and hide it under the mattress.

That would be one idea.

But it might not be the best idea (fire, theft, Chinese deciding to artificially re-value their currency again, etc. etc.)

So if the Yuan under the mattress idea isn’t all that smart, what is the smart thing to do with your money?

“Diversifying” is one investment strategy almost everyone agrees on.

And almost every good investment advisor will tell you that at least 10% of your diversified investment profile should be in gold.

Because in times of uncertainty, people flock to gold.

We are living in times of uncertainty (about our environment, about our governments, about our future welfare, etc.)

And gold is your ultimate backup plan.

This isn’t something you should think about in a couple of years, or in a few months, or even in a few weeks.

This is something you should be setting up today, as soon as you’re done reading this.

We’re not talking about conspiracy theories here… though they do abound and will become even bigger in the next couple of years.

But let’s say that everything continues along as it is now, and the government’s plan for bailing America out of the mess (through made up money) actually works.

If everything goes well, and you’ve bought gold online, 10% of your money is in gold, locked away in a vault somewhere safe.

On the other side, the potential negatives are huge, but here are just a few scenarios:
– Your bank locks down your account because someone else stole your identity, spent on your account, and the bank is busy trying to figure out if it was actually fraud, and no matter how many times you tell them, they still want to investigate further
– A mortgage is applied for in your name and the mortgage company sues you to make payments on a home you’ve never seen, and the court proceedings see fit to lock down your accounts or at least take a portion of your monthly income
– The dollar really does lose it’s status as the world’s reserve currency (it’s probably coming)
– Numerous other negative scenarios

You still you have 10% (or more) of your money in something that, throughout history, has shown to hold it’s value (when traded for real goods), no matter what happens.

Buying gold online is one easy way to have some money available “just in case” or “for a rainy day,” or for the day your bank account gets hacked or spent on, and your bank insists that it was you.

It’s just a good idea to have something physical you can come back to if your bank account suddenly has challenges, or if the US Dollar begins experiencing a really low part of it’s existence.

For now, if you know you’re interested in buying gold online, I have seen two companies which make the process of online gold buying straightforward and simple.

One is APMEX, and the other is GoldMoney.

APMEX is great if you want to buy coins that you can physically possess.

APMEX will ship them to you.

GoldMoney is an online account that you transfer money in and out of.

Your money sits in holding, waiting for you to buy physical gold with it.

Once you purchase the physical gold, it’s held for you in a secured vault. You pay a small monthly fee for them to store your gold (based on how much you buy), but it’s the safest way I know of to have physical gold somewhere.

You’ll see in our next post about buying gold online further reinforcement of why you should take at least a small portion (or maybe a large portion, depending on your perspective) of whatever you have, and invest it into something physical, something tangible.

With the dollar once again gaining some strength, the next month, or maybe 2 months of 2011 should present a great time to buy gold online. For silver, under $33/ounce (or maybe even a little lower) is a good point to enter into the market.